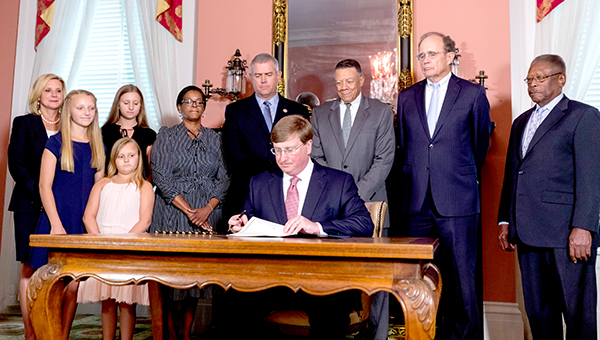 Gov. Tate Reeves signs legislation removing the current state flag and setting up the commission and process by which a new flag will be selected. (Governor's Press Office photo)

JACKSON — With a stroke of the governor’s pen, Mississippi is retiring the last state flag in the U.S. with the Confederate battle emblem — a symbol that’s widely condemned as racist.

Gov. Tate Reeves Tuesday signed the historic bill that takes the 126-year-old state flag out of law, immediately removing official status for the banner that has been a source of division for generations.

“This is not a political moment to me but a solemn occasion to lead our Mississippi family to come together, to be reconciled, and to move on,” Reeves said in a statement. “We are a resilient people defined by our hospitality. We are a people of great faith. Now, more than ever, we must lean on that faith, put our divisions behind us, and unite for a greater good.”

Mississippi has faced increasing pressure to change its flag since protests against racial injustice have focused attention on Confederate symbols.

A broad coalition of legislators on Sunday passed the landmark legislation to change the flag, capping a weekend of emotional debate and decades of effort by Black lawmakers and others who see the rebel emblem as a symbol of hatred.

The Confederate battle emblem has a red field topped by a blue X with 13 white stars. White supremacist legislators put it on the upper-left corner of the Mississippi flag in 1894, as white people were squelching political power that African Americans had gained after the Civil War.

Mississippi voters chose to keep the flag in a 2001 statewide election, with supporters saying they saw it as a symbol of Southern heritage. But since then, a growing number of cities and all the state’s public universities have abandoned it.

Several Black legislators, and a few white ones, kept pushing for years to change it. After a white gunman who had posed with the Confederate flag killed Black worshipers at a South Carolina church in 2015, Speaker of the House Philip Gunn, said his religious faith compelled him to say that Mississippi must purge the symbol from its flag.

Before the governor signed the bill Tuesday, state employees raised and lowered several of the flags on a pole outside the Capitol.

Now, a commission will design a new flag, one that cannot include the Confederate symbol and must have the words “In God We Trust.” Voters will be asked to approve the new design in the Nov. 3 election. If they reject it, the commission will draft a different design, following the same guidelines, to be sent to voters later.

“We are all Mississippians and we must all come together. What better way to do that than include “In God We Trust” on our new state banner,” Reeves said. “The people of Mississippi, black and white, and young and old, can be proud of a banner that puts our faith front and center. We can unite under it. We can move forward —together.”

“I’ve seen leaders around our state; people in business and education and charity and civic work around our state who have come forward and I want to thank them for the strong positions they have taken to help support a change in our flag that will unify our state. I know how tough it is for some of them too, but they have been willing to take the risks as you have a taken the risk to say it is time for Mississippi to meet this challenge head-on and it is time for the Legislature to fulfill its duty under the Republic to which we serve to place a new flag up on top of this capitol for the people of this great state.”

State Sen. Briggs Hopson of Vicksburg Sunday in arguing in favor of the legislation that removed the state flag.

Mayor George Flaggs Jr. reacting to the Legislature voting to remove the state flag on Sunday.

“I love it; I love that we’re going to change the flag. I commend the legislators who understand. I believe the community gets it now that the flag represented a certain part of the population but not all of the population.”

“The Legislature has done the right thing at the right time. It’s great. Great news. It will be removed as the state flag, but it will always be a historic flag in the state of Mississippi and that heritage will be maintained. I think that is very important because it has been around a long time.”

Bertram Hayes Davis, resident of Vicksburg, whose great-great-grandfather Jefferson Davis was the president of the Confederacy

“I was like a lot of other people in Mississippi, just waiting to see what would happen. It was a tough decision to make, and I think the Legislature coming together will move Mississippi toward a brighter light.”

Reeves: We can move on, and with God’s help, we will

Below is the transcript from Gov. Tate Reeves’ speech Tuesday evening moments before he signed legislation retiring the state’s flag:... read more