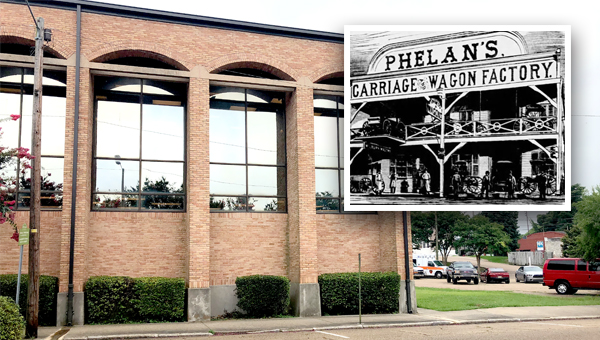 In 1888, Daniel Phelan built this “corrugated iron” building on the east side of Washington Street in the 1700 block to house Phelan’s Carriage and Wagon Factory.

The Daily Commercial Herald reported in November 1888 that Phelan had “invested $10,000 in the factory, pays out $7,000 in wages annually, and sells annually $20,000 worth of products.” The paper also stated that “Phelan manufactures carriages, wagons, buggies and every description of vehicle in use in modern times or on Mississippi Roads. Nay, we doubt not he could turn out an Egyptian or a Roman chariot — such as King Pharaoh drove into the Red Sea, or that in which Ben Hur won his celebrated race — if any customer of archaic proclivities should see fit to order it.”

The Daily Commercial Herald printed this illustration of the carriage works and remarked that “the factory has several departments. The ware-rooms above and below contain the largest stock of buggies, phaetons, carriages, road carts, wagons single and double and every class of vehicle for city or farm, most of which are Mr. Phelan’s own manufacture. In the rear is the large wagon woodwork shop constantly filled with work ordered in all stages of manufacture, while on the left is the blacksmith department with its forges, employing a number of men with blacksmith wagon work or horseshoeing. In other portions are the paint shops and varnish rooms and the force of hands sometimes amounts to twenty.”

In 1889, an article in The Vicksburg Post reported that “cracksmen are at work in the city. Last night the wagon factory of Daniel Phelan was entered through a window and his safe opened. This was, however, a very easy job as it had only two copper cents in it and had not been locked. The police are doing what they can to get clues, but so far have none.”

Phelan moved to Vicksburg at the age of 26 and was a member of the Builders’ and Traders’ Exchange, the American Legion of Honor and the Knights of Pythias. He and his wife, Mary, had five children.

Phelan died suddenly after a bout with pneumonia at his home on Warrenton Road on Dec. 28, 1891, at the age of 46.

Mary operated the wagon works for a time and then sold it, using the funds to build three cottages on South Washington Street.

The building was used to house carriages and as Roche and Lee Livery in 1907 and then was resided and used as an automobile repair garage. The Warren County Library sits on the lot today.

A special police officer will soon be enforcing the regulations for local restaurants and businesses outlined under the city’s emergency... read more