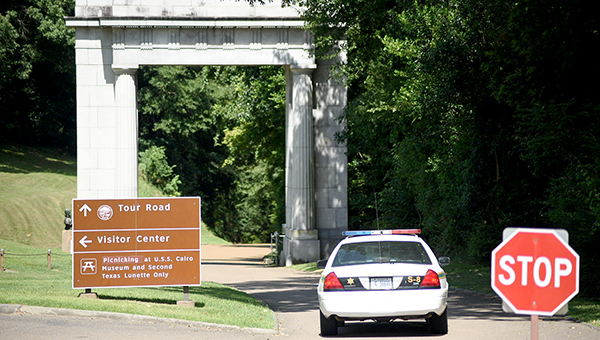 Update: Manhunt nets one of three suspects connected to theft

Three suspects are wanted in connection to a reported theft from a vehicle at USA Pawn on Washington Street.

One of those suspects is reportedly in custody, while two others remain on the loose and the focus of an ongoing manhunt by units with the Vicksburg Police Department.

Officials with the Vicksburg Police Department declined to release information on the one suspect taken into custody as the search for the others continue.

Just after 3 p.m., multiple units with the Vicksburg Police Department, supported by the Warren County Sheriff’s Office, responded to the area around Motel 6 off of East Clay Street.

The initial search centered on the hotel and portions of the Vicksburg National Military Park, which was closed to all traffic as local law enforcement and rangers from the National Park Service conducted the search.

The one suspect taken into custody was captured at the Circle K station at Indiana Avenue and North Frontage Road just before 4 p.m.