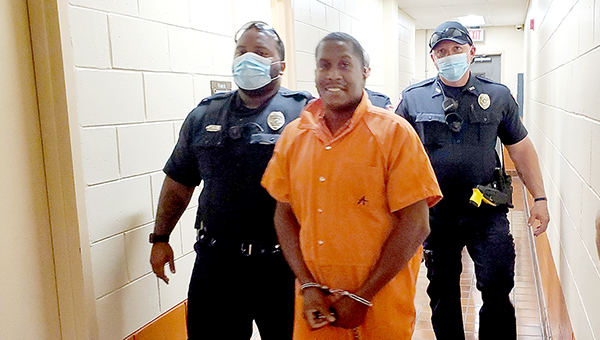 As officers and agents with the Vicksburg Police Department’s narcotics unit walked out of the Central Avenue home Wednesday, they left with arms full of drugs, weapons and cash.

During an operation early Wednesday, law enforcement officials served a search warrant at a home at 812 Central Avenue. Once inside they discovered nine kilos — or 20 pounds – of marijuana and 2,700 ecstasy pills, along with three handguns and one rifle. Also seized was $3,770 in cash and a measuring scale.

Police officials place the street value of the drugs seized at $25,000.

Duane Lamar Williams, 45, who was already on parole for a federal drug-related conviction, was arrested without incident.

Williams has been charged with two counts of aggravated trafficking of narcotics, as well as four counts of possession of a firearm by a convicted felon. Thursday, Judge Angela Carpenter set Williams’ bond at $275,000 and bound his case over to the grand jury.

“This team did an outstanding job. These guys work hard from sun up to sundown. They follow up on any tips they receive,” Moore said at the scene early Wednesday. “Any time you do a search warrant for drugs, it’s dangerous. When you are dealing with drugs, there are guns nearby. We got a huge amount of drugs off the street.”

Lt. Johnnie Edwards said the department had received multiple tips of drug activity from the home and conducted an undercover operation.

The home was put under surveillance beginning at around 4 a.m. Wednesday and the search warrant was issued without incident shortly after daybreak for safety reasons.

“It is a good amount of drugs. It’s a lot. I’ve not seen that much drugs at one time,” Edwards said.

“I have been doing this job for 21 years and that is the most I have seen,” Moore said.