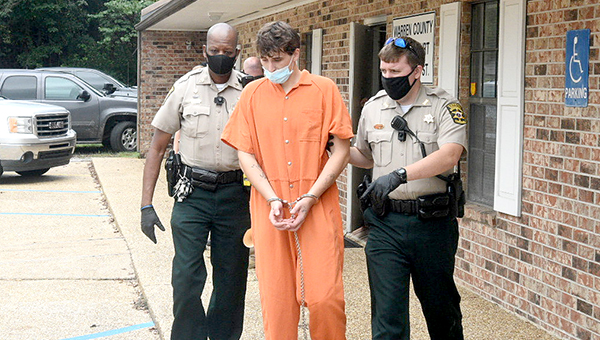 Samuel Hunter Anderson, 25, is escorted out of Justice Court Friday following his initial court appearance. During the hearing, Anderson was charged with attempted murder and felon in possession of a firearm following the shooting of his grandmother Friday morning. Judge Jeff Crevitt ordered Anderson held without bond. (Courtland Wells/The Vicksburg Post)

Suspect charged with shooting his grandmother ordered held without bond

A Warren County man will remain in the Warren County Jail without bond charged with possession of a weapon after felon conviction and attempted murder following the Friday morning shooting of his grandmother.

Warren County Justice Court Judge Jeff Crevitt refused to set a bond for Samuel Hunter Anderson, 25, during an initial appearance Friday afternoon. Anderson is accused of shooting his grandmother at her home on U.S. 61 South. The charges have been referred to Warren County grand jury.

She was taken to University of Mississippi Medical Center by ambulance. Information on her condition was not immediately known.

Warren County Sheriff Martin Pace said the Mississippi Department of Corrections has a hold on Anderson for a probation violation involving a 2016 residential burglary conviction.

Pace declined to comment on what led to the shooting, citing the ongoing investigation.

“We are dealing with the facts right now and the facts are pretty clear as who did this,” he said. “We have him in custody, we’ve got the weapon recovered. We’re just trying to put together the pieces that led up to this.”

Deputies and emergency medical units were called just before 8:30 a.m. to the 9000 block of U.S. 61 South in response to a shooting. Deputies arriving at the scene found Anderson’s grandmother with a gunshot wound to the abdomen. According to sheriff’s department reports, she named her grandson as the shooter.

Anderson was found and taken into custody just after 9 a.m. on the property. Authorities also found a shotgun they believe was used in the shooting.

The city of Vicksburg moved ahead with the long-debated project for a new animal shelter Friday with the acceptance of... read more