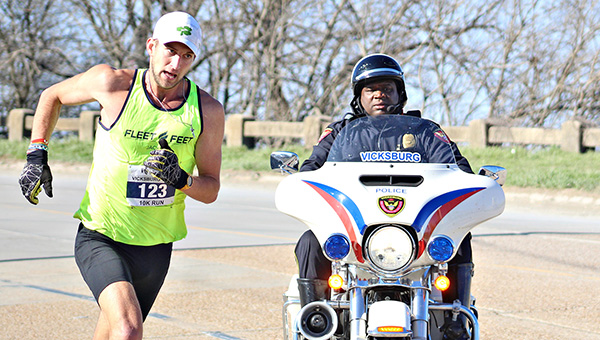 Peter Kazery cuts across the path of a Vicksburg motorcycle police officer near the finish of the 42nd annual Run Thru History on Saturday. Kazery won the 10K run for a record fourth consecutive year. (Ernest Bowker/The Vicksburg Post)

The 42nd annual Run Thru History had a different course, but the same old winner.

Kazery broke a tie with his brother William (2011-13) and Stephen Walsh (1985-87) for most consecutive Run Thru History titles. He also set a record with his fifth victory overall to pass Joseph Curro for most all-time.

“When you tie it all together, I would definitely say it is (special),” Kazery said of his streak. “That’s not something we’ve always talked about, and I’ve been pretty consistent saying anybody can show up or maybe it’s not my day and anything can happen. I’ve been very blessed. If you go back through the record books, there were guys who have run it way faster than us. It’s not something I try to think about, because I enjoy the process of it. I enjoy it here.”

Vicksburg resident Kristi Hall won the women’s 10K championship for the first time after nine runner-up finishes. She posted a time of 45:07 to finish 17th overall, 31 seconds ahead of Jennifer Dantone-Smith. 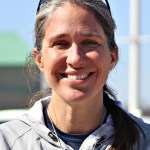 “I can quit running now. I have no more goals. I’ve run Boston, I’ve done this. This is my Holy Grail,” Hall said with a laugh. “I had to wait for a pandemic, and for some of the people not to show up, and a little flatter course. I guess if you just keep showing up it will work out for you and one day you’ll get lucky.”

In the 5K race walk, Forest’s Larry Robinson won his sixth Run Thru History championship, and third in a row, with a time of 29:39. Women’s winner Sonja Dufrene was second in 32:38, while men’s runner-up Mike Bishop was third in 32:48.

It was Dufrene’s first Run Thru History title in nearly a decade of competition, and she did it with a personal-best time for a 5K.

“I’ve been putting in between 20 and 40 miles a week and doing a bunch of halves and wholes (marathons), and every week PRing. I’m happy. Everything is finally paying off,” Dufrene said, adding with a laugh, “Now all the people that have whooped my booty for so long, it’s payback. It humbles you to know this is what you can get by putting in what it takes to get it.” 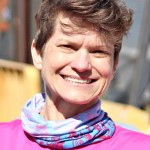 The Run Thru History had a brand new course this year since its traditional home of the Vicksburg National Military Park was unable to serve as host because of COVID-19 restrictions.

The 10K race started and ended at the entrance to WaterView Casino on Washington Street, took a couple of quick left turns onto North Frontage Road and Confederate Avenue, and then doubled back after a turnaround at the Wisconsin Avenue overpass at I-20.

A last-minute change allowed runners and walkers to avoid climbing a steep 100-foot hill at the casino’s entrance at the start of the race, but most said the new course was challenging in its own right because of constant elevation changes.

“We missed the Military Park, but we still had a taste of it. I’d never seen that big house that was a mile and change out,” Kazery said. “It was a tough race, especially out and back. You see who is with you on the way out, and then it can fluctuate on the way back in. It’s always a great environment here.” 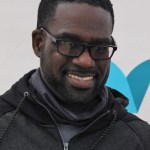 Kazery said he hadn’t scouted the course or done any research ahead of time. He recently started a new job with a company called Refresh, Sips & Eats that has vending contracts all over Mississippi, and it has left little time for training.

“I just started a newish job and I haven’t had a lot of running training. I was very pleased with today, especially not knowing the course. I didn’t do any research. I said I was just going to take it square one and react,” he said.

Whether it was the hills of Confederate Avenue or those in the Military Park, none of it fazed Kazery. He pulled away from runner-up Ryan Crandall after about a mile and did not face a serious challenge after that.

“After the first mile he pulled away,” said Crandall, who finished second to Kazery for the third year in a row. “I had my eyes on him until the hill by the (car) dealership and then I lost contact with him.”

The Vicksburg Swim Association’s “Killer Whales” competitive team spent most of the past year beached because of COVID-19 restrictions. When... read more