‘Gold in the Hills’ opens its 85th season this weekend 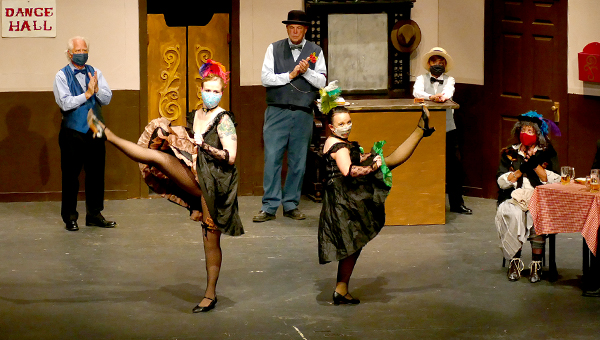 COVID-19 shuttered theatre productions across the country, leaving actors upstaged and audiences in the lurch.

This void in the industry not only affected Broadway, but community theaters as well.

For the Vicksburg Theatre Guild, the pandemic meant they would have to put a halt to “Gold in the Hills,” a melodrama that is performed during the spring and summer months. However, in an effort to continue with tradition and keep the record-breaking show alive, the guild’s board decided to offer two performances this past July.

“Last year, there was concern about holding the performances because of COVID, but the desire to maintain the Guinness Book of World Records status led us to establish and follow rigid procedures to maintain safety,” Board secretary Mike Calnan said.

And now, with spring approaching and the spread of the virus slowing, “Gold in the Hills” will resume performances, with this weekend marking the beginning of the show’s 85th anniversary.

“As uncertain as the 84th season was, my feeling about Gold’s 85th anniversary is a combination of pride and relief,” Calnan said. “The steadfast motivation that ‘the show must go on’ has been an inspiration to see.”

Set in the New York Bowery in the 1890’s “Gold in the Hills” offers audience members an evening of laughter, suspense, dancing by can-can cuties and sing-alongs.

“Yes, we do sing-alongs with old-timey songs from the 1890s before Act I and between Acts II and III,” Calnan said.

The spring season of  “Gold in the Hills”  has a total of 54 actors in the cast.

“Since we rotate cast members for the performances, not everybody is onstage at the same time,” Calnan said. “Last season, we only had 17 actors in the cast for the two performances in July 2020 to allow for social distancing.”

Although COVID-19 numbers continue to decline, Calnan said, policies and procedures used to keep everyone safe will continue. Those attending the shows will have their temperature checked at the door and will be required to wear masks. Seating will be spread out and there will not be a concession stand.

Tickets are $12 and $6 for ages 12 and younger, and are available at showclix.com/events/10243 or at the box office. For more information, visit vicksburgtheatreguild.com.