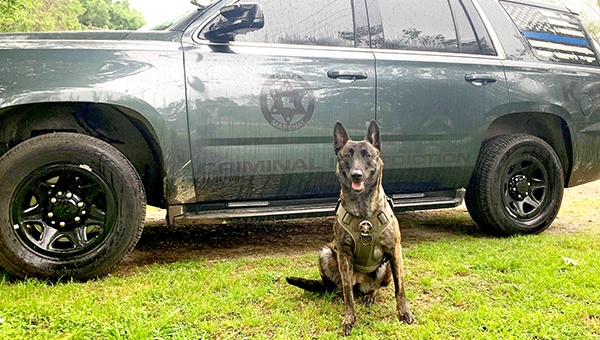 DELTA, La. — For Delta, La., Marshal David Beckham, Zuma is more than a partner, she is part of the family. Since she was 6 weeks old, Zuma  has been alongside Beckham and his girlfriend, Nikki Williams, every day and evening.

Now 4 years old, Zuma is a certified K9 officer, trained to detect drugs and join Beckham in his patrols. Over the past few months, however, Zuma’s health has sidelined her from her patrol work and recently the couple learned she needs an expensive medical procedure to return to her full role as a K9 officer.

Williams said Zuma, who will turn 5 on April 12, started showing issues nearly two years ago when she would start collapsing after she ran really fast or “worked very hard.”

“She would get disoriented and start to wobble and then fall,” Williams said. Recently, the couple paid more than $800 for tests and exams, including an echocardiogram of Zuma’s heart, that finally identified the cause of her issues — Pulmonic Stenosis, a congenital heart defect.

Now, the couple is asking for help to raise money to pay for a surgical procedure to fix the problem and return Zuma to full service.

“Her heart is basically not pumping enough oxygenated blood to her lungs,” Williams wrote in a GoFundMe page set up to accept donations. “If left untreated, she will eventually develop congestive heart failure which will likely kill her.”

Williams said that Zuma, a Dutch Shepherd/Malinois mix, has continued to help in calls involving drugs, but has been significantly limited on her patrol work.

“David is not taking her out every night like he used to,” Williams said. “She will need to have this procedure to get back to doing her patrol work.”

Until the couple can raise the funds for the surgery, when and where the surgery will take place will have to wait.

“Right now, we are not sure if it will be at LSU or at the University of Georgia,” Williams said, adding those are the two institutions with a cardiologist who can perform the procedure. “When we raise the money, then we can get a referral to the facility who can take us at that time.”

Making it more difficult is that Zuma, even though she performs duties for Delta, is the couple’s personal dog. Therefore, they are solely responsible for her care and the costs of that care.

Williams said town officials have not offered — yet — to help pay for the procedure but did reimburse the couple last year for a $650 procedure to remove an obstruction Zuma had developed in her intestines.

As for the procedure to fix Zuma’s heart, Williams said it is called a ‘balloon valvuloplasty,’ which is a minimally invasive cardiac catheterization procedure used to treat narrowed heart valves by stretching them open.

According to Williams, the procedure alone is likely to cost an estimated $5,000 with additional costs associated with travel and medication.

“We won’t be able to do this without the help of you,” Williams said on the GoFundMe site. “We are never ones to ask for help but for our baby girl, we are reaching out for help. Anything will help. Thank y’all.”

To contribute to Zuma’s procedure, visit the GoFundMe site at https://bit.ly/3lOm8wE.