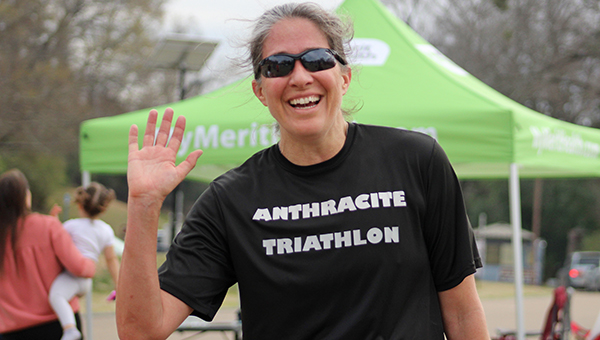 Kristi Hall waves after winning the women's 10K championship at the 43rd annual Run Thru History Saturday in the Vicksburg National Military Park. Hall won for the second year in a row, with a time of 45:52. (Ernest Bowker/The Vicksburg Post) 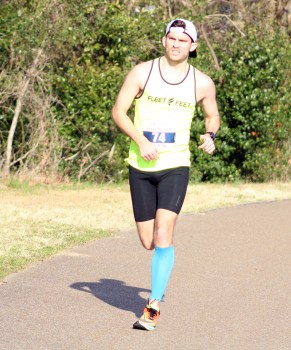 Ryan Crandall heads for the finish line at the 43rd annual Run Thru History Saturday in the Vicksburg National Military Park. Crandall won the overall 10K championship with a time of 35:14. (Ernest Bowker/The Vicksburg Post) 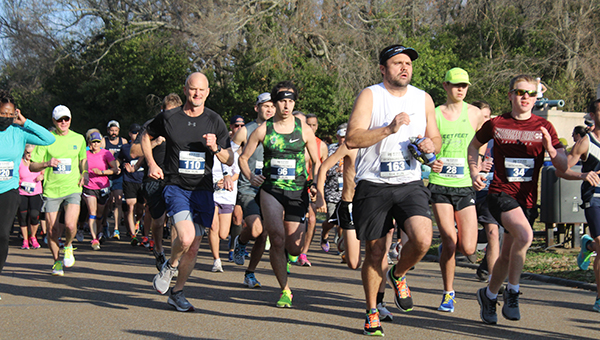 This wasn’t the first time that Ryan Crandall and Kristi Hall have won the Run Thru History 10K. In a lot of ways, though, that made it even more special.

Crandall won the Run Thru History’s men’s and overall championship on Saturday after three consecutive runner-up finishes. Hall won her second women’s title in a row, but first on the traditional Vicksburg National Military Park course.

Both wins, then, were breakthroughs of sorts for the two runners.

“It feels good. For the past three years I’ve been the vice president,” Crandall said with a laugh.

Crandall clocked a time of 35 minutes, 14 seconds to finish atop the list of 200 runners. He was more than two minutes ahead of runner-up Baylor Picard, despite having to make a mid-race pit stop.

“The first mile was good, but at the mile and a half my shoe came untied. So I could lose my shoe or stop and tie it,” Crandall said. “That took (time) off. My momentum went downhill, so I was a little upset.”

Getting the “big” cannon trophy awarded to the Run Thru History’s overall winner made Crandall a little happier. He won the race in 2017, skipped it in 2018, and finished second each of the past three years to Peter Kazery.

Kazery, who had won a record four consecutive Run Thru History 10Ks, as well as a fifth in 2016, did not compete in this one.

“I always get the small cannon. I’m happy to get the big cannon again,” Crandall said.

Hall, meanwhile, had become the symbol of frustration at the Run Thru History. She finished second in the women’s division nine times and had a few other top fives before winning for the first time in 2021.

That was on a different course, though. The Run Thru History had to relocate across town because the VNMP was closed during the COVID-19 pandemic. It returned to the Park this year, and Hall conquered it at last for a victory that might have been sweeter than last year’s triumph.

“It’s fun to win one in the Park,” Hall said. “I did feel like last year had a little bit of an asterisk on it because it wasn’t in the Park. It was still the Run Thru History. It still felt amazing. But winning one in the Park is much harder.”

So is going back-to-back.

Hall has continued to do well in Vicksburg’s other running races — she won the Over the River Run 5-miler for the eighth time last October — but figured her chance to win the Run Thru History had passed.

She dealt with several running-related injuries in recent years and is now 43 years old, an age that’s outside most runners’ primes when it comes to winning large competitive races.

Somehow, Hall has now overcome all of that to win twice in a row.

“It is special. For the past however many years I focused and I trained on this race. This was my whole winter goal. And for the past two years I’ve been injured and haven’t been able to train, and these are the years that I win,” she said. “There’s some sort of life lesson there. I don’t know what it is. But there is one. It’s something about letting go and sometimes things work out.”

Hall quickly tamped down any thoughts of a late-blooming Run Thru History dynasty, however.

“I’ve been beaten so many times that I know you can’t ever get cocky,’ she said with a laugh. “I just got lucky and happened to have a little bit better of a day than other people, and some of the people who can beat me didn’t show up. I’ve been beaten too many times to take a victory lap.”