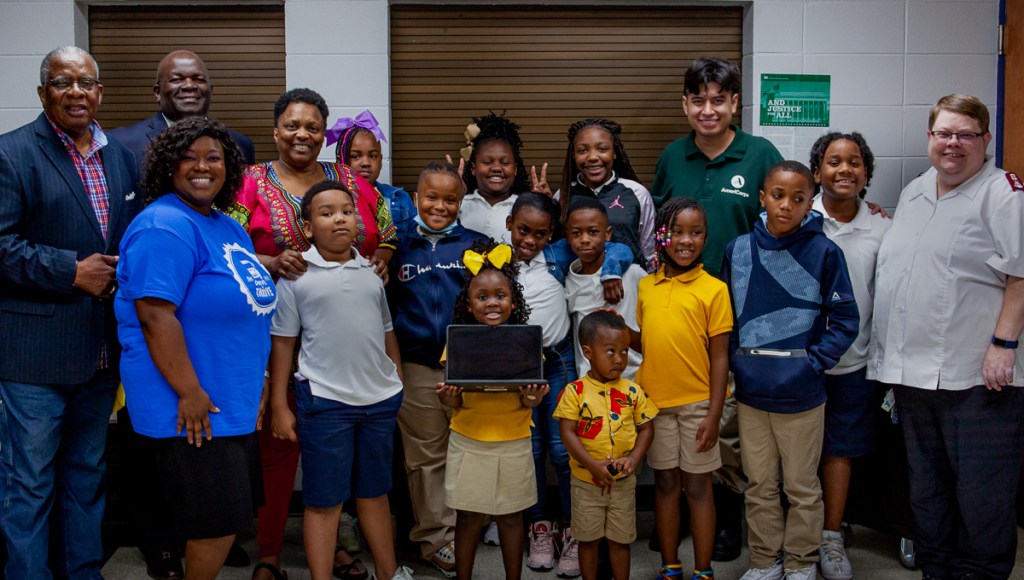 Drive to Thrive, an after-school program in Vicksburg, received a donation of 30 laptops from AT&T on Wednesday.

The organization is a nonprofit mentoring program that provides services for school-age students in the area. To make the donation, AT&T partnered with Human I-T, a nonprofit organization that refurbishes used computers for low-income individuals.

Fateca Grant is the Executive Director of Drive to Thrive.

“The work being done by our team wouldn’t be possible without the tremendous support from the community,” Grant said. “And this generous contribution of devices from AT&T and Human I-T is yet another example of the community coming alongside Drive to Thrive to build better futures for our area young people.”

A ceremony commemorating the donation was held at the Vicksburg Salvation Army outpost, which hosts the program two days a week.

“We are cultivating an atmosphere of positive learning around our beautiful babies, and we want to continue that,” Grant said at the ceremony. “And we would not be here without the help of so many individuals in our community.”

Mike Walker, Director of External Affairs for AT&T Mississippi, also spoke at the ceremony about the company’s donation.

“AT&T has been volunteering and donating to causes to uplift education across the state for many, many years,” Walker said. “Our goal is to make sure that every student graduates from high school; and when they graduate, they’re either college-ready or job-ready.”

Walker himself grew up in Vicksburg. He said the donation came about because a former Vicksburg High School classmate called him and asked if AT&T might be able to donate computers. Walker made some calls and was able to secure the devices given to Drive to Thrive.

The donation, according to AT&T, is part of a company-wide effort that has committed $2 billion from 2021 to 2023 to address the digital divide through investments in digital literacy tools, educational resources, broadband services, computers and low-cost internet access for young learners.

“Let me just say, this community cannot be the community that it needs to be unless all of us play a part in it,” he said. “There’s an old African proverb that says ‘It takes a whole village to raise a child.’ That was true then, and it’s true now.”

Flaggs said that he is grateful for organizations that are providing resources to students who face economic barriers of access to technology.

“If we’re going to have a workforce, then we are going to have to have our children ready and prepared for the future,” Flaggs said. “So Michael, you just made the best investment you could, because you just broke down some barriers.”

For more information about Drive to Thrive, visit the organization’s website at drivetothrivementoringprogram.org.