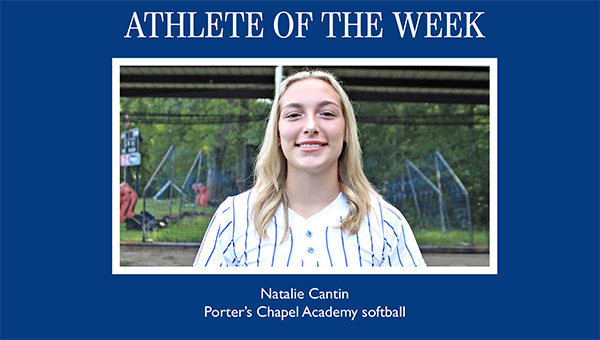 Natalie Cantin’s big day at the plate led Porter’s Chapel Academy’s softball team to two wins, and to her being named The Vicksburg Post’s Athlete of the Week.

Cantin, a sophomore outfielder for PCA’s softball team, was 5-for-6 with seven RBIs and seven runs scored in a doubleheader sweep of Hillcrest Christian on Sept. 10.

Cantin was 2-for-2 with a double, three RBIs and three runs scored in game one, as the Lady Eagles won 24-5 to snap a seven-game losing streak. In game two, a 22-7 victory, she was 3-for-4 with a double, four RBIs and four runs scored.

Congratulations to Natalie and the other nominees, and thank to our readers for voting.