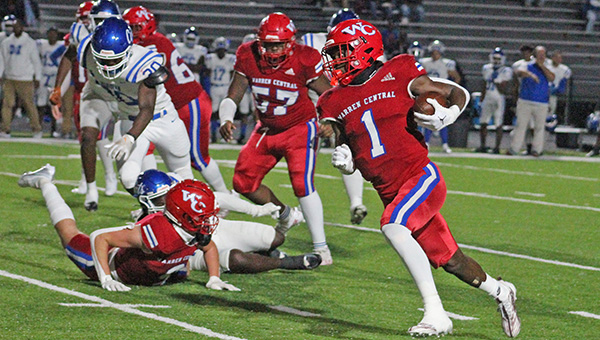 Warren Central running back Trey Hall (1) carries the football Thursday against Meridian. Hall ran for 165 yards and two touchdowns to lead the Vikings to a 24-12 victory. He also caught five passes to set the Warren Central school record for career receptions, with 86. (Ernest Bowker/The Vicksburg Post)

1
Trey Hall would much rather take a handoff and take on a big defensive tackle or linebacker for a hard yard, than catch a pass.

The only problem is he’s really good at catching passes — one of the best ever to do it at Warren Central, in fact.

Hall, a senior, became Warren Central’s career leader in receptions in Thursday’s 24-12 victory over Meridian. He caught five passes, giving him 86 for his high school career. Demond Patton had held the record with 82, set between 2017 and 2019.

The Warren County record for receptions is 123, set by Vicksburg’s Tedarious Brown from 2013-15. Hall is now fifth on the county list.

His total isn’t too bad for a guy who has been as good running the ball as catching it throughout his career. He has 901 yards 10 touchdowns receiving, and 1,653 yards and 18 touchdowns rushing over the past three s

Hall was much more of a speed threat prior to this season, but has shown an ability — and willingness — to run with power as well as speed.

On a 57-yard touchdown run in the second quarter against Meridian, he showed both. Hall burst through a hole on the right side and outran most of the defense, then reached back with his left hand and sent the last one to the ground with a vicious stiff-arm.

“I got a little weight on me in the offseason and I started running downhill and getting first downs,” Hall said.

He’s also worked hard on his pass catching. He has a reception in 16 consecutive games, and had 153 yards and two touchdowns in a 35-0 win vs. Terry on Oct. 21.

“It was something I worked on. I’m an athlete. I can play whatever. They try to stop the run, I can go play receiver. I’m all over the field,” Hall said. “I like to pound the ball. I’m not really a receiver, I’m a running back. But I’ll play receiver. I really like to pound and go downhill.”

Hall entered the Meridian game needing only two receptions to set the school record. He caught a short pass for a 9-yard gain on Warren Central’s first play to tie Patton, then passed him later with a catch he probably won’t brag about. Hall caught a wide receiver screen behind the line of scrimmage and was tackled for a four-yard loss.

He only had 14 receiving yards in the game, but ran for 165 and two touchdowns in yet another showcase of his versatility. It was Hall’s fourth 100-yard rushing game this season. He’ll get a chance to add to that total when the Vikings (9-1) play Gulfport (9-2) in the first round of the MHSAA Class 6A playoffs this week.

“He’s playing as good as anybody in the state right now,” Warren Central head coach Josh Morgan said. “He’s playing at a very high level right now. What he has done is he has gotten better. You can see it in his eyes that he wants to be a champion, and that is how he’s playing. He’s definitely a main part of our success.”

2
Lost in a wild finish to Mississippi State’s 39-33 overtime win over Auburn on Saturday was quarterback Will Rogers continuing to shatter school records.

Rogers broke Prescott’s touchdowns record with a 13-yard pass to Caleb Ducking in the first quarter. It was part of a fast start that put the Bulldogs ahead 17-0 early in the second quarter, but Auburn stormed back in the second half to take a 33-30 lead with about a minute left.

Massimo Biscardi kicked a 46-yard field goal with 29 seconds left to force overtime, and Jo’Quavious Marks scored the game-winning touchdown on a 5-yard run in overtime.

3
Bo Nix took plenty of grief for his inconsistent performances while playing quarterback at Auburn, but he’s becoming a superstar on the West Coast.

Nix, who transferred to Oregon in the offseason, has emerged as one of the most productive quarterbacks in the country and a Heisman Trophy candidate while leading the Ducks to eight consecutive victories.

Nix ranks in the top five nationally in completion percentage, at 73.2 percent. He’s thrown for 2,495 yards and 22 touchdowns. Last season at Auburn he completed just 61 percent of his passes while throwing for 2,294 yards and 11 touchdowns in 10 games.

Most surprisingly, Nix has become a multiple-threat weapon.

Nix became just the second player in the nation since 1996 with at least two touchdowns passing and rushing and at least one receiving in the same game. The only other player to do it was Bowling Green’s Josh Harris in 2001.

“That was my first ever one in all football, so that was pretty cool,” Nix said of his touchdown reception.

4
Defense wasn’t optional in Dallas on Saturday night, it was forbidden.

SMU beat Houston 77-63 in a game that set the Football Bowl Subdivision record for combined points in a regulation game with 140. The previous record was 137, set in Pittsburgh’s 76-61 victory over Syracuse in 2016. SMU and Houston tied the record that Pitt and Syracuse set for most combined touchdowns in a game, with 20.

The record for most points in any game is 146, set by Texas A&M and LSU in their famous seven-overtime contest in 2018.

The halftime score of 56-35 was three points short of the FBS record for most in a half, set by North Texas and Navy in 2007.

SMU and Houston also set an NCAA record for most combined touchdown passes, with 16. SMU’s Tanner Mordecai threw nine and tied another NCAA record with seven TDs in the first half. Mordecai was 28-of-37 passing for 379 yards, and also scored a rushing touchdown.

Houston’s Clayton Tune threw for seven touchdowns himself, and also had a rushing TD. He was 36-of-53 passing for 527 yards, and threw three interceptions. He ran for a team-high 111 yards on 12 carries.

“I’m not really sure what to say. I haven’t seen anything like that before,” SMU coach Rhett Lashlee said.

This was not the first high-scoring shootout between Houston and SMU. In 1989, led by Heisman Trophy winner Andre Ware and facing an SMU team just coming back from the NCAA’s death penalty, Houston beat the Mustangs 95-21.