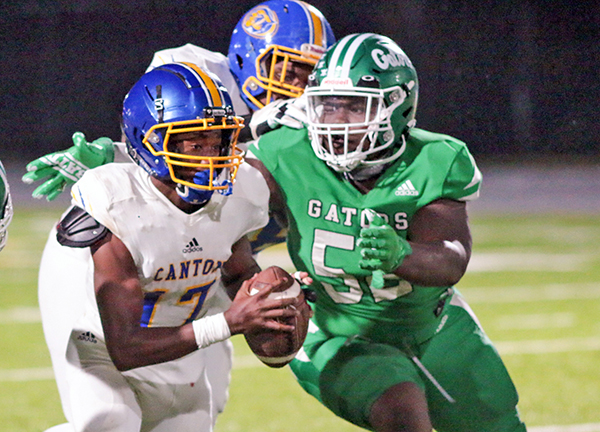 Vicksburg High defensive lineman Demarcus Johnson, right, closes in on Canton quarterback Eric Gilkey during a game in September. Johnson has 77 tackles and nine sacks this season, and has also been playing on the offensive line. Vicksburg plays West Point in the MHSAA Class 5A North State championship game Friday at 7 p.m., at Memorial Stadium. (Walter Frazier/For The Vicksburg Post)

Demarcus Johnson is a big man, but it’s the little things that have turned him into one of the most feared defensive linemen in Mississippi high school football.

The second an opponent breaks the huddle, Johnson starts to observe them. He reads eyes and body language like a professional poker player looking for tells, then processes it all like a super computer before ripping through blockers.

Every tackle Vicksburg High’s junior defensive tackle makes — 77 so far this season — is as much the result of hours of film study and years of mental training as it is raw power and speed.

“When we’re watching film I can tell how the play is going to go by how you slant it or lined up,” Johnson said. “I picked up on it from junior high. Coach (Christopher) Lacey has always been my defensive coordinator and he taught us little stuff like that that’ll help you.”

Johnson’s remarkable mix of instinct, intelligence and physical ability is a big reason the Gators have one of the best defenses in the state and are one win away from their first-ever appearance in the MHSAA Class 5A championship game.

“It’s going to be a big stage. We just have to put forth the effort and get it done,” Johnson said. “I’ve never played on Thanksgiving. Hopefully we make Vicksburg proud.”

Besides his huge cache of total tackles, Johnson has made 21 tackles for loss. Lately, the 6-foot, 260-pound junior has also been playing on the offensive line. Vicksburg head coach Todd McDaniel said it has only made Johnson more dangerous on the defensive side of the football.

Johnson was one of about a dozen freshmen inserted into Vicksburg’s starting lineup in 2020, as part of a movement to build for the future that is paying off two years later.

Last week, Johnson was named the Region 2-5A Defensive Player of the Year in voting by the league’s coaches.

“When I first came in as a freshman it was hard, because I was a kid. I had teammates going through it and coaches telling me what to do, and I caught on quickly. It’s been a good ride,” Johnson said.

Johnson was already a key cog of Vicksburg’s defense heading into this season, but down the stretch he’s taken on a vital role on the offensive line as well. Johnson and his defensive linemate, Caleb Bryant, have been spotted in on offense for depth and bulk.

In last week’s 27-22 second-round playoff win over Callaway, Johnson contributed on both lines. He had nine tackles and a sack on defense, and then helped steady the offensive line when several other players went out with minor injuries.

“He’s a natural football player. We put him in positions where it’s very simple, but he’s a football player. We’ve been knowing it since he was a ninth-grader but we just haven’t had to use it,” McDaniel said. “Now we’re putting him over there and he can do it all. He’s a Swiss army knife. But he doesn’t just do it good, he does it great.”

Johnson said he was told early this season that playing on both sides might be a possibility, and he had no problems adjusting to the dual roles.

“They’d already told me I’d have to play both sides at the beginning of the year, but now that they’re putting me in that situation I’ve got to do it because we’re deeper in the playoffs,” Johnson said. “I’ve been playing offense and defense my whole career, so it’s really nothing new to me. I like scoring and seeing my teammates happy.”

In fact, Johnson is normally one of the first people celebrating when one of Vicksburg’s stable of running backs — Malik Montgomery, DeCorey Knight and Johnny Smith all have more than 10 touchdowns — scores.

Johnson said he gets as much joy out of helping them get to the end zone as he does in registering a sack.

“I like plowing people. That’s fun,” he said with a laugh. “But I like seeing my running backs score, too. At the end of the day they’re going to help me win, too, and get us to the state championship.”

WEST POINT AT VICKSBURG
• MHSAA Class 5A semifinals
• Friday, 7 p.m.
• Radio: 107.7 FM
• Tickets are $12 for reserved seating and $10 for general admission, and are available via GoFan.co