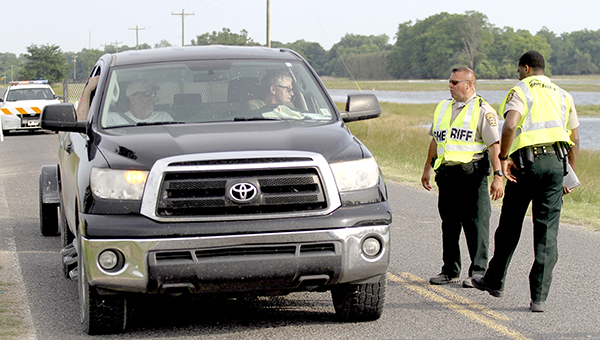 In this photograph from May, Warren County Sheriff’s Deputies Johnny Beauchamp and D’Andre Smith speak to an Eagle Lake resident at a checkpoint near Eagle Lake. A mandatory evacuation order for Eagle Lake, handed down in early March, was lifted Friday. (Courtland Wells\The Vicksburg Post)

One more milestone in what is expected to be a long recovery for those living in the Eagle Lake community was cleared Friday with the lifting of a mandatory evacuation.

The news came Friday afternoon in a statement from the Warren County Emergency Management Agency.

“The mandatory evacuation order for Eagle Lake is now lifted,” the agency said in a post on social media. “Although Hwy 465 is open to all traffic we strongly discourage unnecessary travel in the backwater areas. Also, some side roads may still be closed or are otherwise impassable.”

Flooding along the Mississippi River and in the Yazoo Backwater Area began in January, but it was not until late February that officials began to project worsening flood conditions — conditions that would ultimately lead to one of the worst backwater floods in history, with more than 500,000 acres flooded and hundreds of homes and structures damaged or destroyed.

The Warren County Board of Supervisors handed down the mandatory evacuation order on March 8, but access to the area was still allowed.

Flooding continued to worsen over the next few months, with the backwater levels reaching and exceeding 98 feet at the Steele Bayou Control Structure.

In mid-May, flood fighting efforts — led by volunteers with the help of organizations and agencies, including the U.S. Army Corps of Engineers — were called off as water inundated much of the community and covered many of the roads.

At the same time, the Warren County Sheriff’s Office restricted access to the area, setting up a checkpoint at the only access road into the community.

At the checkpoint, only Eagle Lake residents were allowed to enter and had to register with deputies stationed at the checkpoint. Deputies also began daily patrols of the area around Eagle Lake, restricting boating traffic.

Even though 465 has been reopened by MDOT officials, Warren County EMA has announced that no heavy trucks will be allowed until further notice.