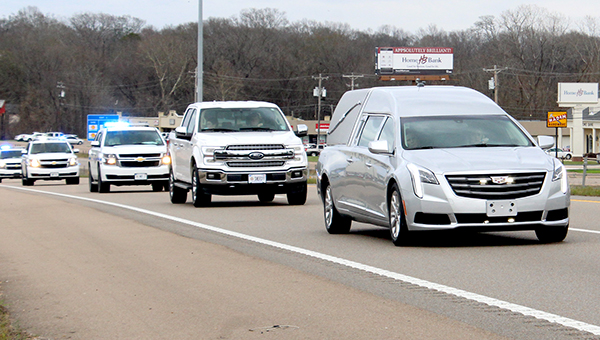 TALLULAH, La. — What was supposed to be months of transition to a new sheriff in Madison Parish was abruptly changed Friday by the sudden death of long-time sheriff Larry Cox.

Huskey said Cox was pronounced dead in the hospital’s emergency room at 10:46 a.m. He had reportedly been transported to the hospital after suffering a fall earlier in the morning.

According to a report in the News-Star in Monroe, Cox had been battling cancer for the past year and was transported to Merit Health River Region.

The newspaper reported Chief Deputy Sammie Byrd said Cox hit his head when he fell, but was talking after the incident.

Officials and deputies with the Madison Parish Sheriff’s Office were joined by those from the Warren County Sheriff’s Office as Cox’s body was transported along Interstate 20 back to Tallulah.

Warren County Sheriff Martin Pace said his department provided a motorcycle and three patrol cars to the procession of more than 20 vehicles that stretched along the interstate.

“We provided a number of vehicles to the procession and blocked off the on-ramp to allow the procession onto the interstate and then escorted them to the state line,” Pace said. “They wanted to come and take their sheriff back home.”

Cox had decided not to run for re-election in November’s general election and was set to hand over the reins of the department to Byrd in June. Cox had served as sheriff for 24 years.

After Cox decided not to run for re-election, Byrd decided to run for the position and won in November.