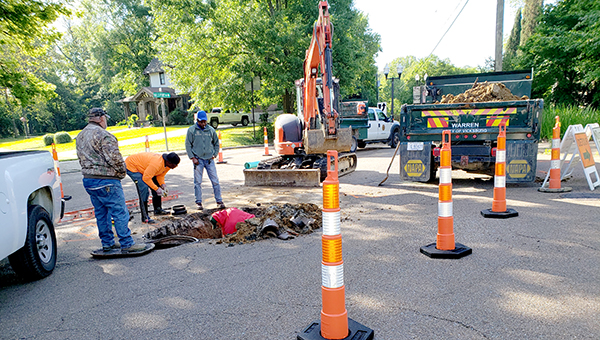 City crews work to repair a sinkhole that was discovered at the intersection of Halls Ferry Road and Cherry Street Wednesday. (John Surratt/The Vicksburg Post)

City crews Wednesday morning repaired a sinkhole that developed in the middle of a well-traveled Vicksburg intersection.

According to city officials, crews with the city’s sewer department discovered the sinkhole around the manhole cover in the intersection where Halls Ferry Road ends and Cherry Street begins, just north of Marcus Bottom.

Water and sewer superintendent Dane Lovell said the hole was caused by a broken storm drain buried 3.5 feet under the road.

The situation, officials said, was deemed unsafe and repairs were ordered immediately.

While the roads in the area were not closed, the city’s traffic department has placed traffic cones to divert cars around the work area.