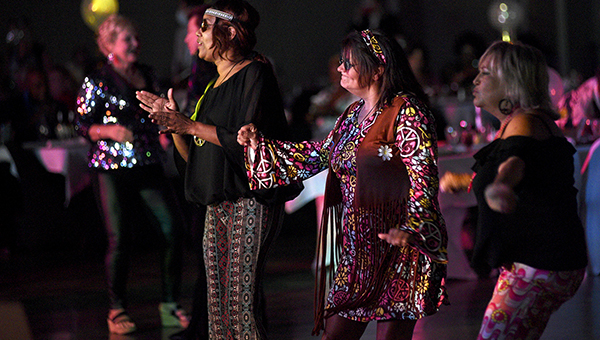 Those who attended the annual Ritz on the River Thursday at the Vicksburg Convention Center take to the dance floor to enjoy the music of New Orleans-based Phunky Monkeys. (Courtland Wells/The Vicksburg Post)

There was nothing normal about the big hairdos, platform shoes and polyester suits that were seen Thursday at the Vicksburg Convention Center. But then again, there’s nothing normal or routine about the annual Ritz on the River other than it is normal to have a good time.

But this year’s event, an event held in the midst of a pandemic, provided far more than money for a local charity, or an event to showcase the facilities and services of the Vicksburg Convention Center. This year’s event — the seventh annual Ritz on the River — gave Vicksburg something far more important, it gave the city a chance to smile.

With a disco theme and a band specializing in the upbeat music of the 70s, the annual Ritz on the River — adhering to all of the necessary social distancing guidelines and safety measures — welcomed more than 200 guests and raised a record amount of money for this year’s dedicated charity, Good Shepherd Community Center.

“To come back to this normal, this is what we do. This is normal for us,” Vicksburg Convention Center Executive Director Annette Kirklin said. “It has been so good to see the smiles on the people’s faces, and they are real smiles.”

After the start of the pandemic, events at the convention center were halted as restrictions curtailed large gatherings. In the past few weeks, as the number of cases of the virus in Warren County, and the state as a whole, have improved, those restrictions have been eased, giving the convention staff the opportunity to host Thursday’s event.

“The thing is, my team has had the best attitudes. It was pretty bleak there for a while, but to come back with an event like this, they have been so pumped up,” Kirklin said. “Doing this event, it’s like brightness has not only come back to this building but to their faces.”

This year’s event, even with fewer people allowed, raised more money for this year’s charity, Good Shepherd, than in year’s past. During the evening, Kirklin, surrounded by her staff and city leaders, presented a check of $8,012 to Good Shepherd.

That success was made possible by event sponsors staying with the event even when it had to be moved from it’s normal July date to September.

“It was very important to make sure we still had something to recognize the good that is going on in the community,” Mutual Credit Union Vice President of Marketing Susan Mandarino said. “Even as we see all the things that are going on in our community and in our world that is not great it’s nice to have something good that feeds our own souls, but also helps other people in need like Good Shepard.”

Mutual has been the event’s main title sponsor since the event began and Mandarino said this year’s event was among the best.

And while Kirklin credits her staff for the event being a success, there was one other individual she said gave her and her team the push they needed —Mayor George Flaggs Jr.

“It was important for the mayor, he did not want us to cancel this,” Kirklin said. “He told me ‘y’all know what to do, you know the protocols, y’all can pull this off. Don’t cancel, everyone needs this.”

Flaggs, who welcomed everyone to Thursday’s event, said he was excited about how the event came off.

“I commend them for having the bravery to do it and do it in a way that was safe,” Flaggs said, adding the event is just one way the city is returning to normal after months of restrictions brought about the pandemic. “I see it all over the city. We need to start returning back to normal as soon as we possibly can. We can do that by practicing social distancing, adhering to good hygiene and wearing masks. If we can do that, we can get back to normal.”

A Mendenhall man has been indicted by the Warren County grand jury on multiple sexual abuse charges involving a relationship... read more