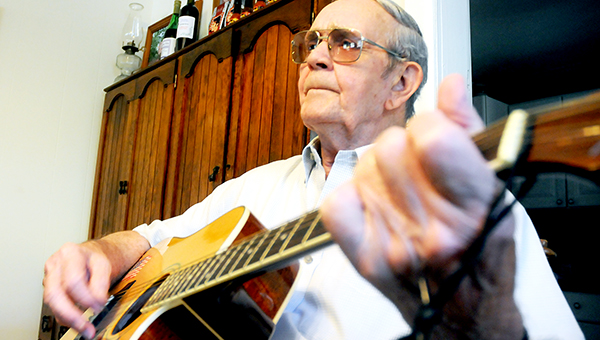 Bud Shiers was a musical icon in Vicksburg and Warren County for decades. His family announced the legendary entertainer died Monday night at the age of 91. (File Photo/The Vicksburg Post)

A beloved part of Vicksburg’s music history died Monday, as local entertainment icon Bud Shiers passed away at the age of 91.

Shiers died late Monday night at a hospice facility in Ridgeland, after a months-long battle with an illness, his family said.

“He was a great man. A great Christian man,” his son, Jimbo Shiers, said of his father.

Gordon Cotton, a Vicksburg author and historian, wrote a feature on Shiers that was published in The Vicksburg Post in October 2010 and is reprinted below.

Funeral arrangements for Shiers are being handled by Fisher-Riles Funeral Home. They are incomplete at this time.

Don’t think you can come between Bud Shiers and his guitar.

He’s done a lot in life — driven gravel trucks, worked in factories, built houses, played baseball and run a country store, among other things — but his guitar was always with him.

Music, he said, is his first love.

Bud, who is 81, doesn’t know where or just when he got his first guitar, but “Daddy fixed it up and tuned it for me.” The family lived in Louise in the heart of the Mississippi Delta, and, “up on the corner was a filling station, and an old black man — when there weren’t any cars there we would sit outside and play the blues. I got him to tune my guitar, and I picked along with him.”

Those were the years of the Great Depression and entertainment was often in the form of a talent show at the local school. The winner usually took home something to eat, like a sack of flour or a bucket of lard. Bud was 9 or 10, but there was never was a show he didn’t win.

“Well, I got pretty good,” he remembers, “and people were telling me what all I was going to do,” and though his daddy “played everything with a string on it,” he told Bud, “Son, you better put that guitar down. You’re going to starve to death pickin’ that thing.”

That was the era when the Texas Troubadour, Ernest Tubb, headed to Nashville, and so did many other country pickers. Bud was tempted, but he didn’t go. His dad’s words still ring in his mind, he said, “and I laid the guitar down” — but not for long.

Bud’s dad operated cotton gins, and it wasn’t unusual for the family to move. Bud was living in Satartia, finished the 11th grade and began driving a gravel truck. He later completed his GED for a diploma.

“In 1945, we wound up on a farm on the Yazoo River outside of Vicksburg,” he said, and he and one of his friends, Tommy Bishop, went to Sears and bought Silvertone guitars for $19.95 each, “and we started pickin’. I lived way out on the river. I was sharecropping, and Tommy was working for Rose Oil.”

They’d get together on weekends at the Shiers’ house. Bud can still visualize Tommy’s car, a 1937 Buick, its headlights way out on the fenders, the lights bobbing as the car came across the fields and rough roads.

“We’d get out on the porch, and I know we made an awful racket,” Bud said. “He couldn’t pick and I couldn’t either, but we were strumming.” Bishop went on to the big time and was playing in Hank Williams’ band when Williams died.

Only once has Bud been separated from his guitar. In 1951, he got a letter “congratulating me because I had been selected to serve my country.” He was in the service for several years, much of that time on the front lines in Korea. Out of the Army, he headed back to Vicksburg. He wasn’t in a band but Frank Gray and Stanley Scallions had the Redwood Rockets, and they had Bud sing a couple of songs, including “Matchbox,” which Carl Perkins made into a hit.

His talent might have been dormant for a year or two, but, “It’s just love that I’ve got,” he said. “I learned to sing at the same place I learned to play the guitar.”

But he still had to make a living, so he took a job on a towboat “and I lasted from Greenville to Natchez.” He got on the boat at Vicksburg, headed up to Greenville where they picked up several barges and then came downriver.

“They put me out there on the front end of that thing with a flashlight. I don’t know what I was supposed to be doing, but I was out there …” He wanted off at Vicksburg, but the captain told him, “I can’t’ do that, but if you’ll go to Natchez with me and come back, I’ll pull in and let you off.” Bud liked the deal and, back at Vicksburg, “I hit the bank before the boat did.”

And then he made the most important move of his life: he went up the hill to Washington Street to the Elite Cafe, and there, sitting in a back booth, was his friend Sadie Watt and a pretty girl he’d never seen before.

“I walked back there and told her (the girl he didn’t know), to move over. I looked down and she had on an engagement ring, and I told her, ‘You might as well give that ring back because I’m going to marry you.”

The girl was Joyce Stanford, and Bud was right: they were wed within six months, a marriage that lasted 54 years until her death. She wasn’t a musician Bud said, “but she liked my music. She went with me.”

Music may be Bud’s first love, but a close second was baseball. He used to play for Bud Allison’s team at Redwood, “a tough team. We’d get in that old pickup truck on Sunday morning and look for somebody to beat.”

It was baseball’s heyday, and Vicksburg had a semi-pro team, the Billies. Bud was persuaded to try out, and the manager sent him to Tallulah where there was an organized club, “organized enough that you rode a school bus with no air to Eldorado to play a game and rode back the same day.”

He played for a year, was persuaded to go back for a second, “and that was my baseball career right there.” Riding in an old bus all day, playing at night, and living off hamburgers wasn’t his idea of a career in sports.

Though he left the playing field, he didn’t totally leave the game, and for more than 20 years, he coached Little League in Vicksburg.

During that time, Bud wasn’t neglecting his music. He’d had several bands, including Delta Ridge and the Roadmasters and refers to those years as when he was “in the Moose circuit, playing at Moose clubs from here to Meridian and back to Vidalia.” He has played with Ernest Tubb, and he and Vernon Martin became Tubb’s opening act.

“Me and Vernon Martin rode the highways for 30 years,” he said, and later John Mamby was his partner. Those were great times, like when he and Vernon were the headliners for the opening of the OPry in Brookhaven, a great deal with live radio coverage, cars parked everywhere — and Vernon forgot his guitar. Bud teased him: “Man you don’t forget your tools.”

Bud never forgot his, but once he left it on the roof of the car, was driving along when it slid off, down the hood and Joyce said, ” Bud there goes your guitar.” He stopped in time, and though “it skidded a little, it didn’t even knock it out of tune.”

There was another time — he’d forgotten when and where — that the band was playing to a full house and a young man was passing through the crowd, holding a cowboy hat, taking up money for the musicians. Everybody thought everybody else knew him, Bud said, but nobody did, “and when he got that hat full he walked right off the door and drove off.”

When Bud’s first son, Jimbo, was born in 1953, he was on the road several nights a week but decided to stay closer to home, and when the second son, Rocky, was born, “I didn’t exactly quit. You don’t drop something like that. We played in this neighborhood. I was playing plenty, but I was at home.”

Locally, the band drew crowds almost too large to handle. They played on weekends at Flanagan’s on Highway 61 South, setting up outside on top of the flat-roofed building, but the traffic blocked the highway, backing up so that they had to shut down the show.

The same thing happened even closer to home. In 1956 Bud and Joyce bought a store at the intersection of Jeff Davis and Fisher’s Ferr Road. Bud started playing on Saturday nights “for maybe 15 or 20 people,” but the event grew so large, traffic was so heavy, parking so congested “that it scared me.” Not enough musicians solved that problem.

Bud’s musical career took a different turn in the 1980s when Levi’s opened in the building near the Vicksburg National Military Park that was so small it held only about 20 people. Soon another place was found, on Manor Drive, but after several years the owner had other plans, and Bud said, “He had two weeks and no place to go.”

Maybe it was fate, probably providence, but they were offered the use of the old Cattlemen’s Association building off Mount Alaban Road, so Levi’s moved there. It’s a nonprofit venture with music and a potluck supper every Saturday night. Contributions help with expenses and gas money for the bands. The musicians rotate from week to week, and among those who play are Bud’s band, “Old Habits,” and the “Wright Road Band.” Some musicians drive from Alabama and Louisiana. Levi’s is a senior citizens’ place — no alcohol, no tobacco — and from 70 to 100 usually show up. It’s real country music — not the Hollywood brand – with perhaps a little rhythm and blues mixed in.

“I don’t know how this job fell on me,” Bud said, “but It did.” There’s no pressure, and he doesn’t get a penny for it, but “I’ve played more and enjoyed more” in the last few years.

He’s been playing for more than 60 years, singing along with his pickin’ but never tired to play the lead, because, “When you play rhythm and sing you’ve done enough. You can’t be worried about what the other fellow is doing.”

Merle Haggard is his favorite musician, and he also likes Charlie Pride and Alana Jackson. He said he can’t take “a full bait of them old crying’ songs. We’ll play a couple of slow ones, then it’s my job to pick ’em up.”

He hasn’t written any songs nor recorded any, Bud said, claiming, “I ain’t smart. I just play it. Read music? Nooooo — I can’t even spell it.”

But he sure can sing and play.