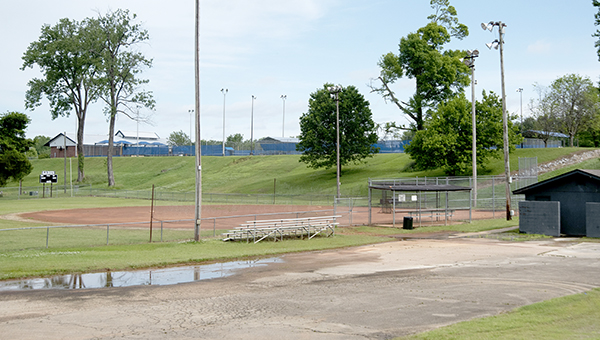 The city moved ahead with plans to create a pickleball complex on the site of this current softball field in the Halls Ferry Park complex. (Courtland Wells, The Vicksburg Post)

Construction on the pickleball courts at Halls Ferry Park could soon get underway.

The Board of Mayor and Aldermen Tuesday awarded a contract to Quality Court Industries of Baton Rouge to build the courts.

Quality Court bid $253,676 to do the work. The bid was the lowest of four bids submitted for the project, which was rebid in October after the initial bids for the courts in September came in over the $278,000 budget for the project. The project was also redesigned to help reduce its cost.

South Ward Alderman Alex Monsour, who is over city recreation, said work will begin on the courts after a meeting between the contractor and project engineer Neel-Schaffer.

“It’s been a long time coming,” he said, adding the new courts will resolve issues involving the Halls Ferry tennis courts which were doing double duty as pickleball courts.

“It’ll help because we won’t be marking up the (tennis) courts or marking up the courts and they’ll (pickleball players) will have their own courts. It will enable us to attract pickleball tournaments that are happening on the coast and all around and get people to the city of Vicksburg,” Monsour said.

Pickleball is a game played with a paddle and a plastic ball with holes that employs the elements of tennis, Ping-Pong and badminton that is played both indoors or outdoors on a badminton-sized court and a slightly modified tennis net.

But the tape used to line off the courts was damaging the tennis courts and threatening the potential to host the U.S. Tennis Association-sanctioned tennis tournaments at the tennis complex, Monsour said in September.

City officials initially planned to build the pickleball courts adjacent to the tennis complex but problems with the proposed site forced the courts’ relocation to the ladies softball field at Halls Ferry.

Monsour said the field was a natural site and the city would be able to build courts specifically for pickleball and players will have access to a nearby restroom that will be remodeled as part of the development.

The Board of Mayor and Aldermen has approved an agreement with VenuWorks that will reduce its monthly management fee for... read more