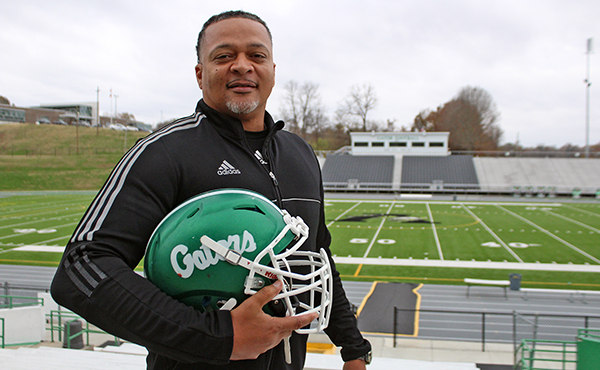 Vicksburg High's Todd McDaniel is the 2022 Vicksburg Post football Coach of the Year. McDaniel led the Gators to a 10-3 record, their first appearance in the MHSAA Class 5A semifinals since 2001, and their first region championship since 1990. (Ernest Bowker/The Vicksburg Post)

The first time he met with the parents of Vicksburg High’s football players, Todd McDaniel recalls, his long-term vision for what the program could be was met with some disbelief and eye rolls.

Maybe they didn’t believe him.

Maybe they’d heard it all before, from a string of coaches who couldn’t seem to push the program forward.
This time, though, they had a coach who was able to back up the talk of a better tomorrow with a tomorrow that was better.

In three seasons, McDaniel transformed a program that had only had fleeting glimpses of success for the previous two decades into one that was one win away from playing for a state championship.

For his work in turning the program around — or perhaps simply waking up a sleeping giant — McDaniel is the 2022 Vicksburg Post football Coach of the Year. He is the first Vicksburg High coach to win the award since 2013.

“I really appreciate it. It’s something that coaches never talk about, but at the end of the year when they receive that accolade it’s always amazing,” McDaniel said. “Without the coaches and players I wouldn’t have it, so we’re going to share this one.”

McDaniel’s 2022 Gators did things that the program hadn’t achieved in years, and in some cases decades. They won the Region 2-5A championship, the first since 1990. They won 10 games and reached the Class 5A semifinals, both for the first time since 2001.

All of that came in the wake of several years of chaos within the program. When McDaniel was hired in 2020, he became Vicksburg’s sixth head coach in nine seasons.

McDaniel brought a track record of success, though. He’d turned around a long-struggling Wingfield program in the mid-2000s, and took Hazlehurst on several deep playoff runs.

A 14-0 win over Neshoba Central on Oct. 21 this year was the 100th of his career and also the region championship clincher.

Several seniors are expected to sign with Division I college programs in December or February. Four players made the Class 5A All-State first team, and three were picked to play in the Mississippi-Alabama All-Star Game.

Seeing the program’s steady progression, and the accolades that are starting to flow in is rewarding, McDaniel said.

“It’s been an extemely fun ride. Just for the coaches and players to buy into your vision, and go out there and take it from the weight room to the practice field to the game field,” he said. “I don’t receive this award without those guys. Those guys have wholeheartedly bought in to everything that we’ve said we wanted to do, and we’ve come together collectively to make sure that it gets done.”

As proud as he is of the Gators’ victories over the past couple of seasons, McDaniel also seems strangely pleased about some of the losses.

Five of Vicksburg’s eight losses in 2021 and 2022 were by a total of 13 points. This season ended with a 14-0 loss to West Point in the Class 5A North State championship game, in which the Gators only gave up one offensive touchdown and moved the ball inside the 20-yard line four times.

The agonizingly close losses, McDaniel said, showed that the Gators belong in the conversation when it comes to Mississippi’s elite teams. It’s just finding that extra edge to truly push them into the upper tier.

“You go back and look at film and I kind of cringe. We had opportunities to blow that game open and just didn’t get it done,” McDaniel said, referring to the loss to West Point. “So it’s a process of what we’re trying to do as far as taking that next step.”

As they head into 2023, the Gators seem capable of doing that. Three of the four All-State players are graduating seniors on defense, as are several other talented, multiple-year starters.

Some younger stars have started to emerge already, however, and the offense has a number of playmakers returning. As McDaniel spoke in an office in the fieldhouse, the clanging of metal plates in the weight room attested to the fact that the work toward keeping the Gators on top is already under way.

He added that he doesn’t plan on Vicksburg’s first 10-win season and deep playoff run in 21 years being a one-off.

“I hope you can understand that this is not the end. This is just the beginning of what we are trying to do,” McDaniel said. “We’re trying to build a solid football program that is in place for years after we’re gone.”