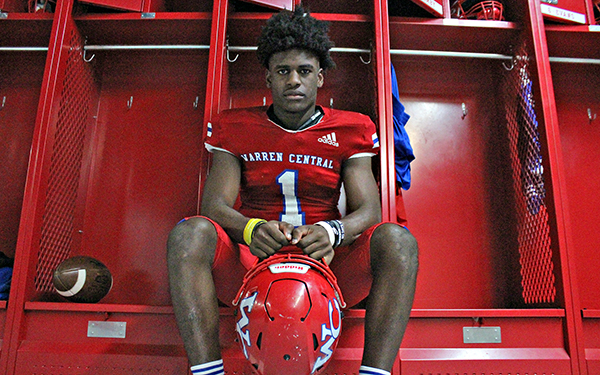 Trying to sum up everything Trey Hall did for Warren Central this season is no small feat.

When the Vikings needed a big play, he was there. When they needed toughness in short-yardage situations, he begged for the ball. When everybody in the stadium knew Hall was getting the ball on the goal line, he still found a way to put it in the end zone.

“Any time you make a run the way we were able to do, you’ve got to have ‘a guy.’ He was our guy,” Morgan said. “Whatever we needed, he would come through for us.”

Hall certainly did that, and then some. The senior running back amassed 1,424 yards from scrimmage and 19 total touchdowns, for a team that finished 10-2 and reached the second round of the MHSAA Class 6A playoffs.

As he wraps up his high school football career, Hall is going out as the 2022 Vicksburg Post Offensive Player of the Year. He is the first Warren Central player to get the award since 2017, and the third since 2005.

“Blessed,” Hall said of receiving the honor. “It was my goal to win something. I’m happy.”

Hall was a key cog of Warren Central’s offense in 2021 — he had 848 total yards and six touchdowns — but injured his ankle midway in October. He gritted his way through the pain, and it wasn’t until the season was over that it was revealed he’d been playing on a broken ankle.

“We didn’t find that out until later, after our season was over with. The year that he was able to have last year shows you his toughness,” Morgan said. “This year he was healthy and you could see the difference.”

Hall showed his toughness in a different way in 2022, by adding a physical element to his running style. It complemented his speed and explosiveness and turned him into a complete back.

One of his signature plays came against Northwest Rankin in October. Facing a third-and-2 deep in Northwest Rankin territory with about two minutes to go, Hall got the ball just as everyone expected. He was hit in the backfield, shrugged off the defender, and fought his way for a first down that allowed the Vikings to run out the clock on a 35-28 victory.

Earlier in that game, Hall powered his way into the end zone on a fourth-and-goal play for a key touchdown, and also caught a 31-yard TD pass. It was a true showcase of the versatility that made him a weapon in all phases of the offense.

“I’ve got a different type of playing style. They think I’m just going to try and run past them. I love to get downhill and get that strong yard. I ain’t coming in there weak,” Hall said. “If I need one yard I’m going to go ahead and get three. I love when the pressure is on me and I’ve got to stick my nose in there and get that yard for my teammates.”

Hall wasn’t just a runner, either. He led the Vikings in receptions (38) and receiving touchdowns (5), while ranking second on the team in receiving yards (415). He had 1,009 yards and 14 TDs rushing.

“I’m an athlete. Running back or receiver, I love them both,” Hall said.

In the regular-season finale against Meridian, Hall set Warren Central’s career record for receptions. He wound up with 88, six more than Demond Patton had from 2017-19.

“It’s not normal to get that as a running back,” Hall said. “I didn’t know it until the coaches told me. I said, ‘I’m going to go ahead and break that.’”

Hall seemed able to do anything he wanted to once he put his mind to it. He also returned kicks for the Vikings, and averaged 100.7 all-purpose yards for his high school career. He averaged 134.7 this season.

Morgan said Hall’s drive and desire helped the Vikings have one of the most explosive offenses in Mississippi. Their 370 total points ranked seventh in Class 6A, and the most for the program since 2017. The Vikings had nearly two dozen plays of 50 yards or more.

“In his toolbox, there’s so many different things that he can do. He was a really special player. Special ability, and a complete package,” Morgan said. “You look over there and didn’t think he could go any more, and he’d look at you and tell you, ‘Give me the ball again.’ Our players fed off of it. They knew who was running behind them and he made us a really explosive offense. Maybe one of the most explosive offenses we’ve ever had. He was a key piece of that.”

Hall still has some football in front of him. He played in last weekend’s Bernard Blackwell Mississippi All-Star Game, and is sorting through several college offers. He plans to sign with a school in February.

“It’s good that I’ve got options. I can sit down and think where I want to go, and my football career is not over,” Hall said. “I love football. I’ve been playing since I was 6. All of the problems you’ve got, it just takes it away when you come play football.”

For all of his physical gifts, Morgan said Hall’s best attributes were the intangibles he brought to practice every day — his work ethic and love of football — that made him one of Class 6A’s best running backs.

“That’s the difference in him and the other backs that are talented. That’s the picture of determination, and the spirit and desire and heart,” Morgan said. “When I say it’s contagious, I mean it. Our team fed off of him and you could visibly see it. You could dang near touch it. That’s special. He was fun to watch and fun to coach.”