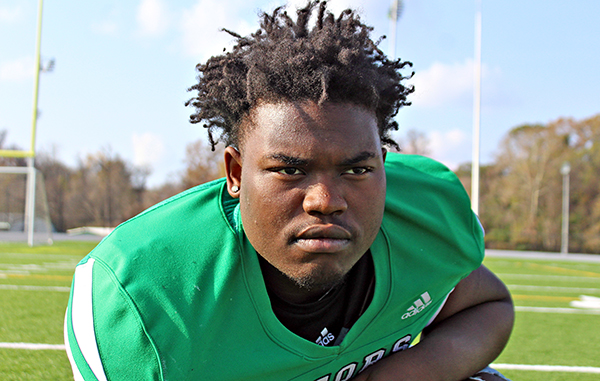 Like a lot of his teammates, Demarcus Johnson got an early start to his high school football career.

The defensive tackle was thrown into the fire as a freshman in 2020 as part of a larger rebuilding effort for Vicksburg High’s program. He was already physically gifted, but soon learned that wasn’t going to be enough to succeed at the varsity level.

“In junior high I was always a dominant football player,” Johnson said. “But when I got up here they taught me you’ve got to really work your technique because these boys are bigger. You’ve got to know what you’re doing.”

It seems that Johnson learned his lessons well.

“If I’m the Defensive Player of the Year it shows me I’m doing something right and I want to keep on that trend,” Johnson said.

Johnson made an immediate impact as a freshman in 2020. He was selected to The Vicksburg Post’s all-county team after registering three sacks and 39 tackles in about half a season as a starter.

He’s had 10 sacks in each of the past two seasons, as well as a combined 40 tackles for loss, to lead a defense that has allowed an average of 11.3 points in that span.

Vicksburg head coach Todd McDaniel said Johnson’s intelligence and awareness, as much as his size and strength, is the key to his success.

“Whatever we throw at him, he absorbs it like a sponge. As far as the techniques, or offensive or defensive game plan, he knows what everybody is doing on the field,” McDaniel said. “It takes a special guy to understand and comprehend everything that’s going on on the field, offensively or defensively.”

Johnson doesn’t just understand the broader concepts of football, he’s adept at picking up on little things in the moment. He said he’s learned to identify physical tells from the way opponents act before the snap, and how to take advantage of them.

“I always had that, but I embraced it more because (defensive coordinator Christopher) Lacey started teaching us more about that. Like the angles and how they look. Now, that’s what I look for,” Johnson said, adding that when he sees an opponent giving away a cue before the play, “It makes me happy. I know I’m fixing to go through him and make a big play.”

The blend of phyiscal and mental ability has made Johnson not just an outstanding defensive tackle, but a very good offensive one as well.

When the offensive line struggled this season, McDaniel inserted Johnson at guard. By the end of the year he was a full-time two-way player.

Vicksburg’s offense had three backs backs with at least 970 rushing yards and averaged 27.2 points per game.

“Demarcus just wants to win. He doesn’t care what side of the ball he’s on. Defense is his expertise, but he’s probably one of the better offensive linemen in the state also,” McDaniel said. “When college coaches come to recruit him, they don’t need to just look at the defensive side of the ball. He’s a hell of a guy. He’s a great football player. He’s a great athlete. You seldom get a kid who can do all those things and do them well.”

Johnson said he enjoys defense more, but playing on the offensive line is growing on him.

Johnson’s individual success helped take his team to a new level. The Gators posted back-to-back winning seasons and allowed less than 200 points in consecutive seasons for the first time since 2007-08. They have six shutouts and allowed eight points or less in 12 of their last 25 games.

The dominant defense helped the Gators finish 10-3 this season and reach the Class 5A semifinals, both for the first time since 2001. They won their first region championship since 1990.

“It was fun from the beginning. We were in the weight room for a long time. Coaches told us we were going to make it deep in the playoffs. I’m sad we didn’t make it to the state championship, but we got a lot farther than what people thought,” Johnson said. “We hold each other accountable. We work hard. We know what we’ve got to do. We didn’t want people to score over seven on us, so we handled business.”