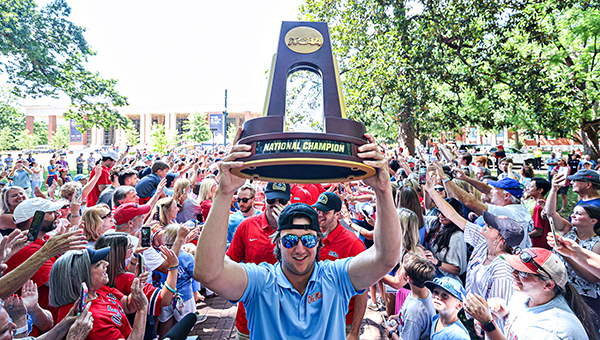 A national championship celebration and a celebration of life defined the 2022 sports year in Mississippi.

Ole Miss’ stunning run to the NCAA baseball national championship in June, and then the death of Mississippi State football coach Mike Leach in December, provided counterpoints on the emotional spectrum. Both events brought people together, however, to first celebrate a rare accomplishment and then the life of one of the sports world’s most unique individuals.

Leach, known for his entertaining tangents, love of pirates, and football genius, died Dec. 12 at the age of 61 following complications from a heart condition.

In the days following his death, tributes poured in from all over the country recalling Leach’s quirky character and influence on college football. Thousands attended a memorial service at Mississippi State’s Humphrey Coliseum on Dec. 20.

Although his passing was tragic, the tributes to Leach were a testament to a life well-lived.

“One time we were at practice and he had his earphones in off to the side. We were like, ‘What is he doing?’ He was learning Spanish on his phone,” former Mississippi State offensive lineman Reed Buys said after Leach’s death. “He was such an interesting guy. Everybody has a thousand different stories of Coach Leach and they’re going to live on forever.”

On the more joyous side of things, Ole Miss’ monthlong march to its first baseball national title was the stuff of legend.

The Rebels were the last team to receive an at-large bid to the 64-team NCAA Tournament bracket, then went 10-1 once they got in. The run included a victory over Southern Miss in a super regional series in Hattiesburg, and concluded with a two-game sweep of Oklahoma in the College World Series championship series in Omaha, Nebraska.

Ole Miss fans from across Mississippi scrambled to make the 800-mile trip to Omaha for the final games. Several dozen made the trek from Vicksburg, many at the last minute, to witness something they’d waited a lifetime for.

“I’ll be 62 soon and that’s why I came. If it takes that long again, I won’t be here,” Vicksburg resident Bill Fulcher said in June. “We felt like we had to be here. It may be the only opportunity in our life to do it. It was worth the drive — and the drive we have to do tomorrow.”

Ole Miss’ championship run and Leach’s sudden death were only two of the sports stories that put Mississippi on the national stage in 2022.

At Ole Miss, Lane Kiffin made headlines with snarky tweets and by being courted for Auburn’s vacant head coaching position. He wound up staying in Oxford, with a new six-year contract that pays him nearly $9 million per year.

Former NFL star Deion Sanders used his celebrity status to elevate Jackson State’s football program as its coach, appearing on “60 Minutes” while becoming both a hero and a rival within the Southwestern Athletic Conference.

Sanders led Jackson State to its second consecutive SWAC championship, then announced immediately afterward that he had been hired as Colorado’s head coach.

In Warren County, the biggest story stemmed from the successes of several high school teams.

Vicksburg High had its best football season in more than 20 years, by reaching the MHSAA Class 5A semifinals and winning 10 games for the first time since 2001. The Gators, who had three first-team All-State players, also won their first region championship since 1990.

Warren Central’s football team reached the second round of the Class 6A playoffs, while Porter’s Chapel Academy won a playoff game for the first time since 2008.

“I’m extremely happy for the kids. I’m proud of the kids. They did a great job. They had 10 straight wins. Not many people can say that,” Vicksburg coach Todd McDaniel said after the Gators’ season ended with a 14-0 loss to West Point in the Class 5A North State championship game in November. “But we’re trying to get to the point where we have 10 or 11 wins every year. That’s our goal. Getting back to this point next year and possibly taking that next step is what we’re shooting for.”

In February, Porter’s Chapel’s boys’ basketball team advanced to the Class 3A semifinals and the MAIS Overall Tournament for the first time since 2013.

PCA hadn’t made it to the state tournament in eight seasons and lost in the first round of the district tournament in 2021. It finished with a 22-14 record in the 2021-22 season, doubling its win total from the previous year.

“People will remember them. People remember the class that won the Class A state championship (in 2013). They remember the good teams before that,” said PCA coach Walter Hallberg, who stepped down before the start of the 2022-23 season.

Off the field, a change in leadership marked the start of a new era for the Vicksburg Warren School District.
Athletic director Preston Nailor resigned in July to take a job as an assistant principal at Velma Jackson High School in Madison County. James Lewis was hired to succeed him a month later.

Lewis, a Vicksburg native, had been the athletic director and boys’ basketball coach at Jim Hill High School in Jackson. In just 10 years he rose from a teacher’s assistant in the VWSD system to a prominent leadership position.

“It’s really exciting to get a chance to come back home,” Lewis said in August. “I’m a product of the Vicksburg Warren School District. I got my start here. This is where I cut my teeth and got a chance to start in education as a teacher-coach. My story is made for the movies.”

Also in July, Gene Allen, a former high school football coach and local businessman who helped start the Red Carpet Bowl, died at the age of 91.

Allen was a key figure in the story of high school athletics in Vicksburg in the 1950s and 60s. He came to Vicksburg in 1953 to coach at Carr Central, first as an assistant and then as head coach.

Allen helped Carr Central win the 1955 Big 8 championship and took over as head coach the following season. He stayed in that job for eight seasons, moving over to Cooper High School when it opened and Carr Central closed in 1959, and compiled a 48-28-5 record.

In 1962, Allen was part of the group of local civic leaders that established the Red Carpet Bowl football game.